This was such a fun quilt to work on with my guild & my first introduction to the Calgary MQG was in this little coffee shop meeting in November 2014. I am third from the right in group photo. My quilt block is the bottom right block!

The Calgary Modern Quilt Guild completed its QuiltCon charity project with the direction and spirit of Becca Cleaver. From an energetic and laughter-filled coffee shop meeting to designing the quilt to making the final stitches, she led the commitment.

Our design is built off of blocks from guild member Bernadette Kent’s book, Rubies, Diamonds and Garnet, Too. Bern also helped sew the quilt. With its on point layout, a million HSTs and that great gray slab background, the quilt takes some seemingly traditional blocks to a wonderfully modern level. We decided to use the chosen fabrics to represent the four seasons, and the machine quilting reflects that as well. 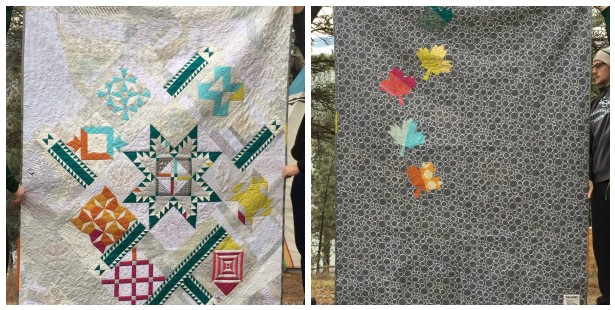 We had members piecing, a long arm volunteer, others squaring up, another binding, someone attaching the sleeve. It was a true group effort completed around everyone’s busy schedules. That quilt traveled a lot in the city!

Calgary is no stranger…

Edin has four custom page templates that are great for business and corporate websites: